The One Million Campaign Has a Spectacular Launch! 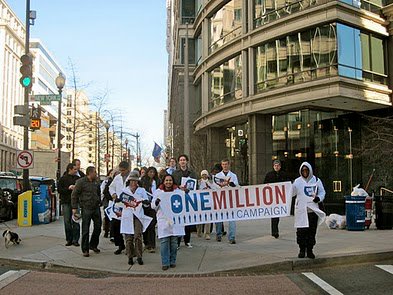 In 2012, DFA doctors and medical students will educate one million of our fellow colleagues and the general public about health care reform and the ACA. On Sunday, January 16th, Doctors for America launched this One Million Campaign, surrounded by the inspiring message of Martin Luther King Day and the background of the National Mall in Washington, D.C. The physicians and medical students from across the nation that participated in the campaign’s kick-off were led by Zeke Emanuel, renowned bioethicist and health policy expert, and the day provided a dramatic jump start.  It started with an appearance by Dr. Emanuel on Morning Joe, and a DFA march to the Washington Monument, followed by a jog around the mall. Participants then fanned out over the mall to distribute hundreds of flyers and obtain signatures of support.  Campaign sparks ignited elsewhere across the country.  Doctors rallied and marched in Dayton, and community forums are being organized from New England to California.

The DFA website provides a wealth of resources to engage physicians in the campaign, whether it be through informational presentations or op-ed letter writing. Physicians from 36 states have joined the campaign so far. Those of you who have signed up can add your name to the map of participants, download a copy of the “Declaration of Support” for signatures, receive training materials for presentations, log your activities or donate.  If you haven’t signed up yet, it is quick and simple! Watch for frequent updates on our actions and progress as this campaign to “engage, educate and empower” spreads throughout the membership and across the country.