For the next two weeks, maybe all non-Olympic related news should be on hiatus.  After what has already been a summer saturated with a contentious election season of which health care is at the center, a stagnating economy, the seemingly perpetual threat of a Euro meltdown, and the need to decipher a new onslaught of acronyms (LIBOR? What now?) in order to figure out who exactly has done what to sabotage the international banking system- it might be a nice mental reprieve just to revel in something joyful, something transcendent.  Cue Danny Boyle’s Olympic Opening Ceremonies. In the midst of a delightfully sardonic, ever-so British spectacle, I was reminded that for many other nations, when looking for something to celebrate, health care can be elevated to so much more than the cantankerous debate we seem to trapped in here.  While Voldemort battled the Mary Poppins (yes, plural) and the Sergeant Peppers marched, the British National Health Service took center stage: 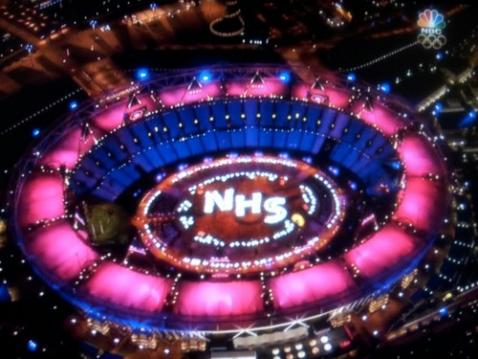 Despite the many areas for improvement that exist and are debated within the British system, it is still a national source of pride, a symbol of rebuilding after WWII.  I try to imagine MEDICARE in lights at the last American games in Salt Lake.  Despite how integral a part of our national policy it has become, despite its public popularity, despite the fact that cuts to it have become the bogeyman thrown up across the political spectrum, I have difficulty visualizing its transition to a source of national pride, rather than a necessary evil.  And among the OECD, and increasingly among the emerging & developing economies as well, this consternation is serving as a sad reminder of American exceptionalism.

In the middle of my news vacation, this was furthered home by an ironic turn of phrase that bubbled up in the breaks in Olympic coverage.  On his trek abroad, presumptive Republican Presidential nominee Mitt Romney complimented a health care system with an approval rating in the 90% range on its ability to contain costs while maintaining high standards of quality.   In his remarks, he was quite accurate in characterizing the dilemma as such:

However, the major ways these costs are kept under control involves tight regulation of the health care industry by the Israeli state, including an individual mandate that each citizen carry insurance.  They choose between a variety of nonprofit plans which have to provide a broad set of government-mandated services.  In turn the state pays these plans a capitated rate based on expected cost-of-coverage for an individual, through funds raised from general tax revenues, with a secondary insurance market available for services not covered and/or those who want supplementary coverage.  Interesting observation from a candidate who has stated his opposition to the ACA.

But as time continues, Israel will be subject to the same strains as many other health systems: an aging population with a wider array of more expensive health care treatments available.  And this is where the true strength of their system may lie.  As summed up by Zwanziger et al. in Health Affairs[1]:

“The annual budget debate in the Israeli parliament—particularly the portion dealing with the new goods and services to be covered by the national health insurance program—gives the general public an annual lesson in cost-benefit analysis. The debate clearly identifies the other areas besides health care that are in competition for additional resources. In the process, it paves the way for the conclusion that some medical interventions, especially those that are not cost-effective, will not be covered.”

At a national level, they have a frank conversation about how much good these new interventions can do- whether it’s a new device, drug, or more end-of-life care.  And at what cost to the general public, and what cost to other sectors in the public arena.  Britain, with its celebrated NHS, likewise has the National Institute for Health and Clinical Excellence (NICE).  This body weighs the evidence for various treatments and interventions, including cost among the factors it uses in recommending which should be covered by the NHS.  This has led to some controversy, including limits on drugs for Alzheimer’s disease, MS, and various cancers.  Some drug coverage has been reinstated due to public pressure (with still questionable evidence on efficacy), but in other cases later evidence has vindicated the decision of the panel.  But in both cases, these debates force a reckoning that is becoming increasingly inevitable.  Costs continue to rise, and an honest and accountable process is needed to decide the best route to go about dealing with these challenges.

Here in America, we struggle to even broach the discussion.  The Medicare Independent Payment Advisory Board has been a lightning rod of criticism for even the insinuation of “rationing” care.  We continue to struggle to even find ways to curb overtreatment where there are negligible benefits, let alone interventions where the true benefits are much murkier.  Medicare cannot use  cost as a factor in choosing what to pay for, just as it cannot negotiate for pharmaceutical prices, unlike most other health care systems.  But by keeping these debates out of the public forum, we risk suspicion, the opportunity for meddling, and most tragically, the health and welfare of both our patients and our nation as a whole.  We need to keep striving to create an honest dialogue where trust is not negated because we admit these half-best measures exist, but rather our forthrightness becomes something to celebrate.  It might even propel the American health care system, from something remaining here in the dark, to something we could see in lights on an international stage, celebrated rather than ignored.