We know the work to protect our patients does not stop. In the wake of our tremendous victory to defeat efforts to repeal the ACA, join us in taking some important steps during this August recess to hold members of Congress accountable for their votes on ACA repeal and to urge congress to move forward in a bipartisan manner to improve health care.

Following the failure to pass three different bills last week, Senate Republicans have temporarily halted efforts to repeal-and-replace the Affordable Care Act, though the White House is still seeking a path forward for repeal. The Administration is pushing for the Senate to continue working on health care legislation, but it seems that Senate leadership is now focusing on bipartisan efforts to stabilize the health insurance market. Meanwhile, the fate of the cost-sharing reduction payments (CSR) to health insurers is still uncertain, as the Administration cast doubt on whether the federal government would continue funding those subsidies. Members of the Senate Health Committee are planning to hold bipartisan session hearings, beginning the week of September 4, to "stabilize and strengthen the individual health markets," while urging the The Administration to continue paying the cost-sharing subsidies until then. Republican and Democratic governors have also reiterated their desire for funding that stabilizes the market, putting forth proposals to bolster policies which help their constituents afford health insurance. And as the administration continues to mull its decision regarding CSR payments, a federal appeals court has ruled that state attorneys general can defend the subsidies given that terminating them would "directly and imminently" cause an insurance premium hike and lead to more uninsured.

Amidst the uncertainty, insurers are still expected to make final adjustments to their proposed 2018 premiums by August 16 and must make final decisions about whether to sell Obamacare plans in 2018 by September 27. Molina Healthcare is one among some other insurers that have been exiting the exchanges, recently announcing its exit in Utah and Wisconsin, citing hefty second quarter losses in those markets. Anthem Blue Cross has also reduced individual health plan coverage for some 150,000 Californians, exiting from 16 of the 19 California regions it covers. Following its pullback from the exchanges, Aetna reported a 52% jump in second-quarter profits and raised its 2017 forecast. And at least six states with GOP governors— Arkansas, Kentucky, Arizona, Maine, Wisconsin and Indiana— have already drafted plans that would change eligibility guidelines for Medicaid. This is likely to impact low-income Americans and those with certain disabilities, if states add work requirements, introduce drug testing for recipients or raise premium prices.

This past week the Senate also passed a key funding bill, which renews the FDA's authority to collect feesfrom the prescription drug and medical device industries. The bipartisan legislation will account for $8-9 billion over five years and represents over a quarter of all FDA funding. The bill passed after the Senate passed a separate bill which expanded access to experimental treatments for people with terminal illnesses. The "Right to Try Act," championed by Senator Ron Johnson (R-Wis.) allows patients to request access to experimental drugs directly from drug companies without having to go through the FDA; but, does not require drugmakers to make the experimental treatments available.

And on the last day before leaving for the August recess, the Senate confirmed Dr. Jerome Adams to be the 20th Surgeon General of the United States. Adams served as Indiana's state health commissioner and stated in his hearing that his main priorities would be the opioid epidemic, wellness and community and employer engagement.

With the threat of coverage for millions on the line, doctors and medical students from Washington, DC to California took to the streets to make their voices heard and successfully beat back the latest attempts to repeal the ACA.

In addition to rallying to save coverage, DFA’s Drug Pricing, Value, and Affordability Campaign, led by Bruce Rector and Justin Lowenthal, organized national stakeholders for a conversation on the pressing issue of rising drug prices.

Board Member Dr. Kyle Ragins joined with Congressman Jimmy Gomez (CA-34) to speak about the importance of preserving the ACA at the “Our Lives On The Line” bus tour kick-off in Los Angeles. The bus will be traveling across the country this summer.

As the ACA repeal voted loomed, Board Member Shalini Pammal organized doctors and health advocates for a vigil on the steps of the Massachusetts State House to urge Senators to put patients over politics.

After the vote, State Leader Dr. Umbereen Nehal attended a rally in Cambridge to thank members of Congress who stood with patients and voted against ACA repeal. She was mentioned in a Boston Globe article covering the event.

Dr. Katherine Scheirman shares the DFA NY, together with a coalition of state physicians,  participated in a “die in” to continue to raise awareness for the deadly consequences of taking away coverage. The team also conducted meetings and outreach to Senators Gillibrand and Schumer.

Medical students at Mount Sinai also participated in several phone banking efforts to defend the ACA and Medicaid. Students were able to provide unique perspectives due to their broad exposure to the healthcare system and the fact that some are on Medicaid themselves.

William Coe, a medical student at the Johns Hopkins School of Medicine and Johns Hopkins Bloomberg School of Public Health, penned a powerful op-ed in his hometown paper in Raleigh, North Carolina. In the piece he discussed the opioid epidemic and the necessity of expanding and maintaining Medicaid in NC to support efforts to save lives.

“Individuals suffering from mental health and addiction stand to benefit the most from Medicaid expansion. Across the country, Medicaid accounts for 25 percent of all spending for mental health disorders and 21 percent of all spending for substance use disorders, making it the largest source of financial support for such services, according to the Substance Abuse and Mental Health Services Administration (SAMHSA).”

State Leader Dr. Donald Nguyen recently joined health advocates for “Our Lives On The Line” rally in Dayton, Ohio to urge Congress to put an end to repeal efforts and focus on bipartisan action to improve and strengthen the ACA. The event was part of a national day of action across the country. 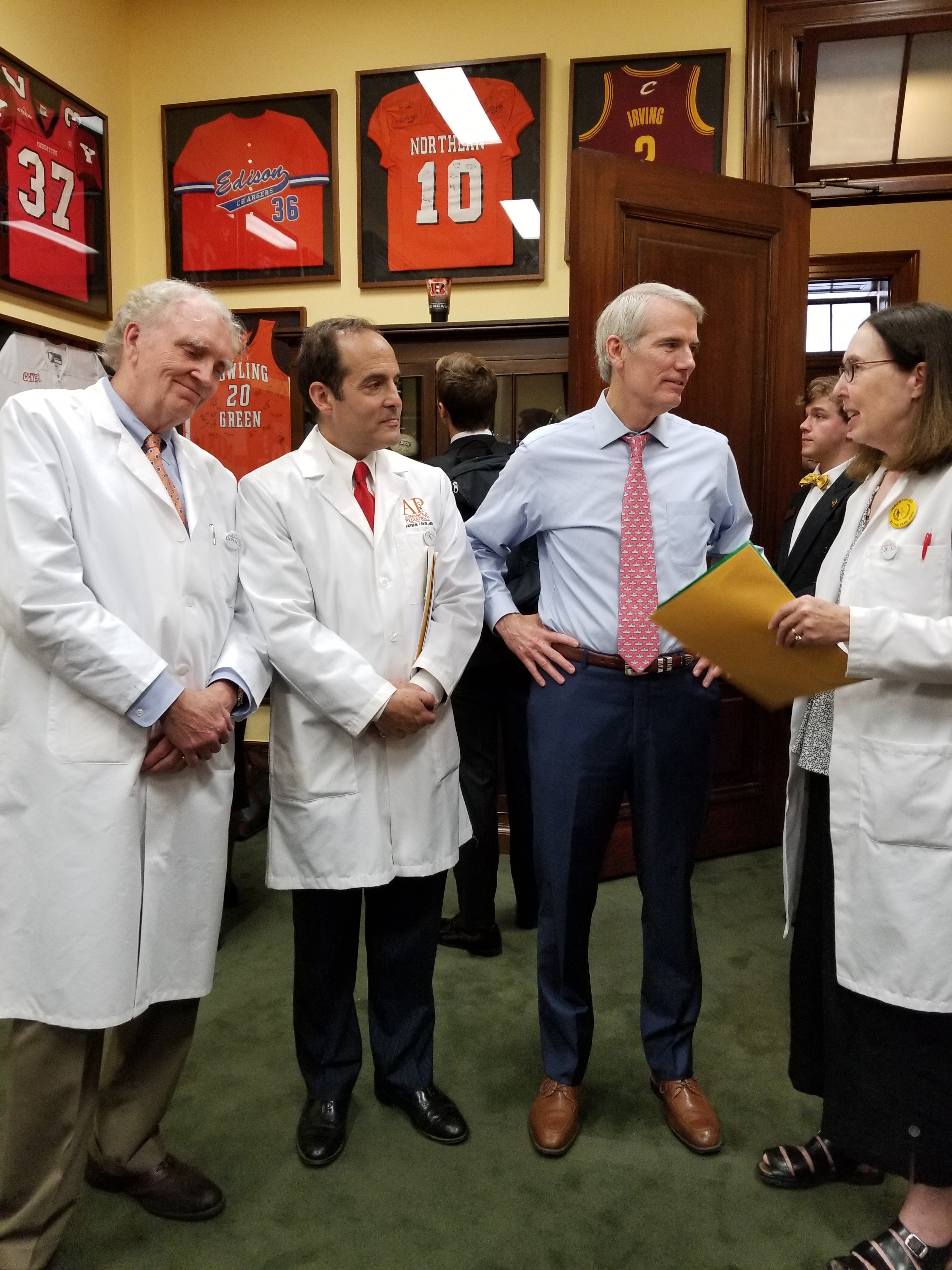 Dr. Benjamin Abella participated in a Facebook panel discussion with Congressman Raul Ruiz MD and Dr. Don Berwick (former director of CMS) about the consequences of repealing the ACA.

Board Member Dr. Meghana Rao spoke at the “Our Lives On The Line” rally in the nation’s Capitol about the life changing impact the ACA has had on her patients in Baltimore. After the rally she marched with hundreds of advocates, patients, and health providers to the White House.

Don’t forget to tell us about what you are up to. Email DFAHQ@drsforamerica.org with your updates and photos.